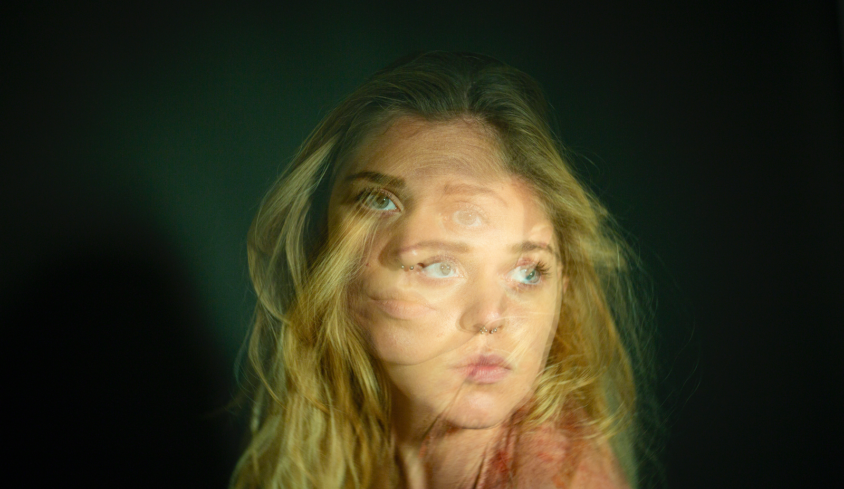 In France in 2019, 149 women were killed in the name of domestic violence. Sara Farid, a Pakistani photojournalist, has created a photographic exhibition on the issue of femicides in France. She’s been a journalist for 15 years and has been working on gender issues and Pakistan violence against women. She was very surprised, arriving in France in 2018, by the number of femicides in a western country. She covered the late November 2019 march against domestic violence, which was considered the biggest in the history of France. Sara Farid has portrayed the violence that victims go through in her exhibition called Trapped I Cut off I Confined, presented in the Festival vision d’exil in the 20th district of Paris. Guiti News interviewed her on her professional journey and her work for this project.

The power of journalism

Firstly, Sara Farid tells us about her time in Pakistan. Her path into journalism is directly linked with the urge she always had for covering women’s issues. “I started with radio journalism. For three years, I worked in radio. I was running a production house in Pakistan with six women. We were producing radio content about women’s and children’s issues in Pakistan. It was sort of a revolutionary time because Pakistan had just opened up private media. Before that, it was only state media,” she explains.

“It was important to talk about women’s issues because, generally, in a conservative Islamic country, many things about women are not discussed. For instance, rape, or women living with HIV or AIDS, harassment, and general domestic violence. And then we did a program about the stories of women who were raped. There was a lot of pressure: ‘What are you doing? We don’t talk about this, this is national radio!’. But, the radio manager was very understanding and gave us room to talk about these issues. So, that was my start.” Sara Farid is truly dedicated to her work and wants to start the discussion surrounding gender issues.

She started her career in research and she studied politics, but the work that came along was not fast and effective enough for her. “I joined journalism because I saw the amount of energy and force I had in me, I needed to use that somehow. And journalism gives you that. You see problems in front of you and you talk about them. And you share people’s stories in the mainstream. It becomes that channel between people’s misery and the mainstream. One of the stories we made was picked up by the National Parliament in Pakistan and was discussed, and it influenced legislation. I think it’s one of the most powerful platforms. It empowers you.” Sara Farid became a journalist to tell the stories of unheard and marginalized people.

“France has the highest number in Europe. And 2019 was the deadliest year for women.”

Sara Farid arrived in France with her partner in 2018. After receiving refugee status she wanted to continue her project, but she was worried that France wouldn’t have the same social issues… or so she thought. “I came across the story of the murder of a transgender person in August 2018. I covered the protest that happened after that at Place de la République (a famous square located in the heart of Paris). From there I started to explore under the surface, beyond what you see in Paris into reality. And that’s how I discovered that there are deep-rooted social problems, especially issues surrounding gender, despite it being a very liberated country,” she explains.

Sara Farid started covering various stories. “Cases started popping up on domestic cases. I found about NousToutes and they were talking about the women that were killed because of domestic violence. To me, it was very shocking. France has the highest number in Europe, and 2019 was the deadliest year for women. Then I covered the march in November 2019 against femicides. It was the biggest march in the history of France about femicides. It was huge,” she says.

“Eastern values do not mean that women are so liberated”

In Pakistan, Sara Farid had to constantly fight for equality. To get an education, to find professional work, to get a driving license. Everything needed to be fought for. And to her, France represented a western liberated country. “When a woman starts to talk about these subjects, people tell you ‘oh you’re trying to follow the West!’ or ‘this is a very western culture’. Eastern values do not mean that women are so liberated. I always thought there was a better world for women outside of religion and conservative countries.”

She explains the gap with the situation in Pakistan. “For women in Pakistan, France was an ideal. It’s like using a time machine, going from Pakistan to France and arriving somewhere many years ahead of time.” She says, “In Pakistan, a woman was killed just because she chose to marry someone of her own choice. Coming to France I thought things would be much better. And they are, the laws are there, women are much liberated. But it’s still very shocking when you hear a woman is butchered in a relationship of love.”

For her photography project, she dealt with very violent cases. “There was one case where a woman was burnt alive by her boyfriend, in her apartment. In front of her seven-year-old daughter. I could not stop thinking of that little girl who saw everything. She saw her mother dying, killed by her father. How do you deal with that?” She continues: “There was another case of a woman who was a scientist and her boyfriend killed her and her body cut to pieces was found floating in a suitcase in a river outside of Paris.”

In 2019, 149 women were killed in France, and most of them in very violent ways. “To me, it doesn’t make sense. As we speak, some women must be getting beaten up. On the 11th of November, it was the 87th woman that was killed. There was a woman who was 26 years old and she was strangled in front of her two kids,” she describes. “Why is this still happening in 2020 in France? There’s a problem here. My whole life I’ve been fighting against the patriarchy and I end up in France and I see in many ways that patriarchy is alive. Many men do these things because deep down they know they can get away with it because their gender allows it. Why?”.

She took out some pictures from newspapers. And then, she started to document the stories of women who are victims of femicides. “I wanted to work on documentary photography. I wanted to share their stories and to be able to visualize them, to tell people what they went through.” She explains: “With these photographs, it depicts what women go through in their relationship when they are victims of domestic violence.”

“These photos aim to recreate the scenes,” she begins. “You can see one of the women has a hole burnt on her forehead; it’s a case where the boyfriend threw an ashtray on her face. She went to the police station and they didn’t take her seriously. They said to her ‘you must have anger problems, you must have done something’. That’s gaslighting.” Sara Farid was very surprised that the police in France were not reactive enough to face the victim; they questioned her judgment and the complaint was not filed.

Sara Farid assumes her choice to show difficult photographs describing violent scenes. “It’s a lot for some people who see the exhibition. But I deeply felt the need to do this. When we thought of a name for the exhibition, we were thinking a lot about ‘home’, as in ‘home sweet home’. But for some women, it is ‘home bitter home’. For some women, home is hell,” she deplores. “The whole exhibition is about lockdown during Covid-19. The numbers of victims of domestic violence increased during the lockdown, and women were and are stuck at home with their abuser.”

“Whenever you go outside, you eventually come home. Home is a place where you feel comfortable and safe. It is hard to imagine that these women are not safe in the place that should feel the safest”.

Sara Farid also met the families who are mourning their lost ones. She explains how both difficult and empowering this experience was. “Listening to these stories gives you chills, but it also gave me a lot of strength. I featured two women from the victims’ families. One is Sandrine and the other is Hélène. They are both part of the National Union for Families who are victims of femicides. They’re respectively President and Vice-President of the Union,” she says: “Their strength gave me even more determination to believe in this project. Nobody knows how to deal with this kind of violent loss. So, the purpose of this association is to help families with this kind of tragedy. They help them with legal support, mental support. It was wonderful to listen to their experiences of helping each other”.

She adds: “Hélène said to me, ‘It’s my life’s purpose, to talk about femicides and end it, to do whatever it takes’. So, in this tragedy, they found the strength to come together and become a force. That’s very inspiring.”

For Sara Farid, it is very important to keep talking about the issue. “This exhibition’s purpose is to keep these conversations alive. To not let these women who lost their lives in the name of domestic violence down,” she begins. “It’s also about moving forward. How to take the next step. The state has to take it seriously and make it a priority. You can’t just say that the numbers this year are less important than last year. It’s not fair. We need to push socio-political combat.”

She adds: “Today, it’s about being more reactive and more vigilant. You need to be more alert if you find any signs of a woman being in distress and call someone”. She says: “It is complicated because there’s a culture of silence, that domestic issues should be private. So, we need to deconstruct this individualistic idea that you can’t ask for help. You need help! You need help when you are a victim of domestic violence!”, she stresses.