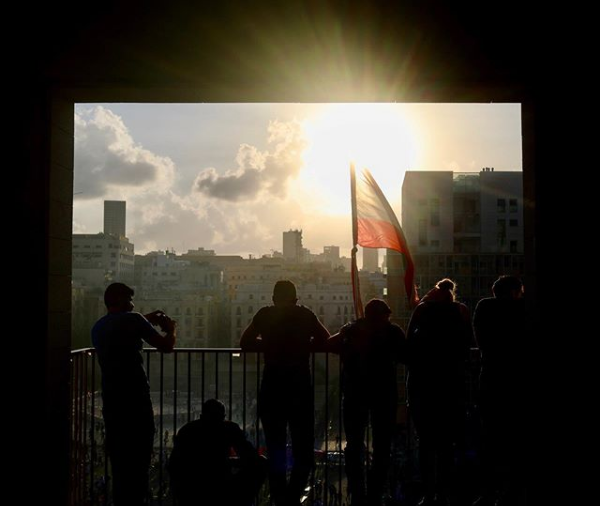 On August 4th, 2020, two tremendous, devastating explosions shook the Lebanese capital. These caused the death of at least 200 people, injured more than 5,000 people, and left another 300,000 homeless. Among them were Lebanese people, but also Syrian and Palestinian citizens, migrant workers, and other foreigners living and studying in Beirut. The tragedy is slowly becoming less present within the headlines. Yet, the anger of Lebanese people who are at the heart of the demonstrations, known as thawra or revolution, continues to grow.

On Guiti News, we are giving a voice to those who have witnessed the destruction of the city. In our series Lebanese Voices, Guiti News calls attention to not only this disaster but also to the political situation in Lebanon, their desires, and hopes for the future.

Joly is Lebanese. He is a 24-year old political scientist and has been working in the humanitarian field for around three years. Now, he is pursuing a Master’s in Political Science. To him, it always has been crucial to address issues of corruption within the Lebanese government, even before the beginning of the thawra (revolution) in October 2019. Determined to prevent the Lebanese politicians from acting with impunity, he monitored the 2018 parliamentary elections within a Lebanese non-governmental organization. “I was reporting all violations towards democracy and Lebanese law. Thanks to the work we did, a new law passed in 2018,” he says. “But it was manipulated by Lebanese political parties for their own interests,” regrets Joly.

The role played by the main political parties in Lebanon, is one of the main points that protesters have been criticizing since the beginning of the revolution. Like so many other young Lebanese, Joly was thrilled by the start of the demonstrations in October and chose to support the so-called revolutionary movement in his own way. “I could not really get involved in the demonstrations because of the restrictions of my job,” he explains. “I was working with an Italian NGO in Lebanon and part of the security guidelines that you are required to sign restricts your activity in political events. But through the work I was doing, I was contributing to the general efforts in my own way. Also, all my friends were involved in the revolution. So I was getting information about the revolution on a daily or even on an hourly basis. I knew everything that was happening on the field.”

To Joly, what the revolution has achieved since it started is incommensurable. In a country like Lebanon, the possibility for the people to overcome the political and the religious divide was not only very new but promising for the future. But, according to him, the thawra got infiltrated by the Lebanese political parties and even some militias tried to turn it to their own advantage. “Because of these interferences, the people who were actually demonstrating all together got separated,” he regrets. “But I also think that at one point, people were not able anymore to demonstrate their ideas properly,” he adds. “This is not a value judgment. I truly think that you cannot consider every single person who is protesting on the streets to be educated and able to clarify his goals. But the problem is that it created a lot of misunderstanding and miscommunication between the revolutionaries which, to me, led the revolution to astray from its original path.”

As if the situation has not been complicated enough in Lebanon for the past few months, the blast in Beirut made everything even more challenging. “I cannot say anything but that the explosion happened at the worst moment for everyone, literally the worst one we could have ever imagined. Basically, it was what we would call the cherry on the cake…”

Since October 2019, the situation has only gotten worse in Lebanon. The repression towards the demonstrators has intensified, and the economy of the country has completely fallen apart, as Joly highlights. “If you check international reports, they have recently shown that in 2019, 8% of the Lebanese people were living below the poverty line. In 2020 the number jumped from 8% to 23% of people living in extreme poverty. The number of people living just above the poverty line or belonging to the middle class also jumped. Everybody is facing this issue in Lebanon these days,” says Joly. “There’s nobody in this country, except the politicians, that is not affected by the current crisis,” he adds. As a direct consequence of the explosion, more than 300,000 people are now homeless in Beirut. For the ones still living in their homes, it is incredibly demanding to complete the necessary repairs. “Because of the exchange rate, nobody can repair the damages of the houses because nobody can afford the material needed. So everybody tries to fix his house the way they can, often with help from the people living in the same neighborhood.”

The house Joly was living in was in Mar Mikhael, a lively street very close to the port. Like all the buildings in this neighborhood, it got severely damaged. But Joly says that he has no right to complain. “I’ve been incredibly lucky to have left Beirut before the blast. I left the city only two or three days before it happened. I could have been there that day… To be honest, it is still hard to realize everything that happened since then and how much the city has been turned upside down. I used to bike near the port every single day. Everything that got badly damaged was actually where I was living daily…”

Political affiliations: between loyalty and denial of the old world

It has almost been two months since the blast, six months since lockdown restrictions were announced in Lebanon, and a year since the revolution started. The least one could say is that the Land of Cedars has been experiencing an enormous amount of traumatic events this past year. In regards to these events, the Lebanese government happens to be entirely unable to listen to the claims and concerns of the population. It also has failed to protect it from the dangers it has had to face. Worse still, the government and militias have tried to frighten their own people, preventing them from claiming their basic human rights.

“During the demonstrations, there has been a lot of aggression towards the people demonstrating. The army was actually using live ammunition against the demonstrators,” recalls Joly. “I believe that the violence of the government is a terrible thing for the pursuit of the revolution. The fact that Lebanon is becoming a police state since the state of emergency was declared is definitely obstructing the revolutionary movement from continuing,” he adds.

The revolution has been and still is unable to fulfill its goals. The fear of poverty, the repression of the government, and the spread of Covid-19 are, among other issues, the reasons why Joly believes this. “One of the other problems is the exploitation of the most vulnerable people by the political parties in Lebanon,” Joly says. “Uneducated people are most likely to fall for their discourse and to keep on believing their lies. Certain political parties are still supported by many people who are not willing to let go of their political beliefs. However, I believe that since the revolution started, their perspective has changed – at least in most of the areas in Lebanon. Many people who were politically affiliated now refuse the help of political parties,” explains Joly enthusiastically.

A wind of change?

The tragedy that happened on August 4th has not been able to call into question the change of mentality that occurred since the beginning of the revolution. “The people in Lebanon have switched from being followers to citizens. Before this, all political parties used to have a tremendous influence on the population. But now, the situation is different for several parties, especially for Christian parties,” explains Joly. “I live in a Christian area, and I can see that many people, who were politically affiliated, no longer are. Even within my own family, I can see how things are changing!”

There is no magic recipe to maintain this positive and powerful dynamic. But to Joly, there are paths of reflection that one can follow, such as the crucial role played by the so-called civil society parties. “I believe that these kinds of political parties are not able to change everything, but they can contribute to making a change. They already started to have an impact. A few of their representatives have been successful during the last parliamentary elections in Beirut. But I think that we also need to be careful. It is not because they say that they come from the civil society that what they propose necessarily makes sense. If I am going to vote for them, they should have a plan, should be transparent, should be accountable, and so on. Otherwise, who says that they would be any different from the others? You can not believe every single person who says: ‘I want to work for this country’. Prove it. That is the essence of voting for any party. Unfortunately, in Lebanon, this culture is not present. Even if political parties had a program, people would not read it.”

To Joly, Lebanese people have a responsibility towards the current situation as much as the politicians do. “Let us not blame everything on the politicians,” he reminds. “We can not blame only, let us say, 300 people. There are more than six million in Lebanon. We are the people who elected the politicians, we brought them to the government over the course of the last thirty years, and we were the ones supporting them without even questioning anything.”

The situation has gone on for decades. According to Joly, this is due to all the unresolved consequences of the Lebanese Civil War. “After the Lebanese Civil War that lasted fifteen years, people should have been able to mourn, and whoever was responsible for the crimes should have been taken to court, and so on. But this process of seeking justice did not happen in Lebanon. That is the reason why we are completely unable to move on because justice is what helps people mourn, process, and move on. I believe that if justice is not served for the Beirut blast, our generation will be like the generation before, unable to heal and move on.”