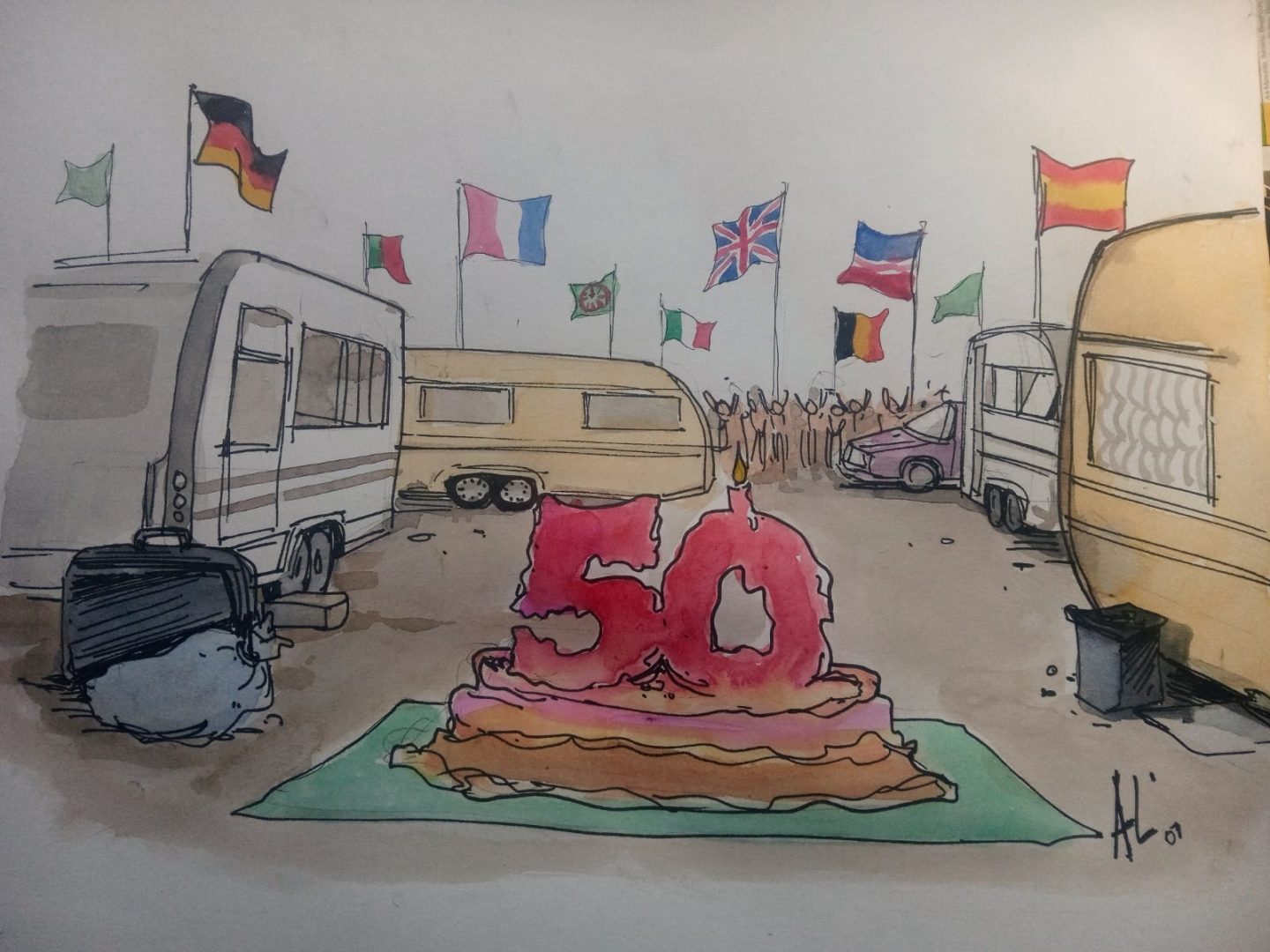 Today, on International Roma Day, Roma communities celebrate their rich cultures and histories, but it is also an opportunity to remind the world of the persistent human rights abuses facing Roma across Europe. On this day 50 years ago, the First World Romani Congress, originally held in the UK, saw representatives from nine European nations agree on the preferred descriptor of ‘Roma’, a flag and anthem for Roma peoples, and they paved the way for further activism. One vital battleground for Roma activists is the fundamental right of Roma children to receive an equal education. A long-standing struggle has been the right to an equal education.

Text: Fil Sys, independent Roma rights researcher & writer on the educational segregation of Roma children in Czechia and the effectiveness of litigation to tackle the problem | Drawing: Al’ Mata

Victor Hugo once said that to ‘open the school door, closes a prison’. School doors across Europe are, however, still shut in the faces of many Roma children. With an estimated population of up to 12 million in Europe, the Roma are the largest minority in a continent totalling over 740 million inhabitants. In Czechia alone, a quarter of a million identify as Roma, accounting for 2.4% of the total population. For decades, international monitors have recorded the segregation of Roma children from majority population children in European education systems.

A Czech case at the European Court of Human Rights in 2007 brought to the fore the European-wide issue of Roma educational inequality. The court declared that the practice of indirect and direct educational segregation was unlawful, and urged Czechia to desegregate and reform national schooling. To this day, the Czech government is accused of enabling and maintaining structures of segregation in schools. Whether disproportionately placed into schools designed for children with mental disabilities, all-Roma classrooms in mixed schools or Roma students physically removed to different parts of a school; the vicious cycle of educational poverty imprisons present and future generations.

As a Czech Roma man, I am aware that I am privileged to have an education that was denied to many other Roma children. Linking the word ‘privilege’ to education is problematic. After all, education is a human right. So, investigating how boys and girls who looked like me are treated in the Czech education system was, and still is, personal, but should be of universal importance to us all. As former Czech President Václav Havel poignantly stated, the treatment of the Roma is a ‘litmus test for a civil society’.

What I found during my research at Charles University (Czechia) and the University of Nottingham (UK) was not new, but widely acknowledged and ingrained into Czech and other Central and Eastern European societies. The denial of educational equality and widespread practices to segregate Roma children on the basis of their ethnicity. One of the cruellest and most damaging methods to continually marginalise and oppress a whole community. Denying children the right to personal development and Roma communities to generational development.

The phrase ‘separate but equal’ comes to mind. Coined from a case way back in 1896 America (Plessy v Ferguson), the Supreme Court infamously decided that whilst black and white citizens could be equal, it was constitutional to have laws designed to segregate. As a result, the educational segregation of black and white school children was legally justified. In 1954, Justice Warren in the landmark case of Brown v Board of Education finally declared that segregation in the field of education has ‘no place’.

Segregation in the sphere of education also has no place with regards to Roma children in Europe. Yet, throughout Europe, there exist reports of Roma school children being removed to off-site annexes away from majority population children, teachers creating exclusively Roma classrooms at mixed schools, head teachers transferring Roma from mixed schools to Roma-only schools and the use of biased psychological testing to disproportionately place Roma into special schools designed for mentally disabled students.

Researching at Charles University, I wondered whether there was a landmark case defending the educational rights of Roma school children in Europe. A Brown v Board of Education moment for Roma communities? There was.

Despite litigation at national levels, it was not until a Czech case reached the Grand Chamber of the European Court of Human Rights (ECtHR) in 2007 that a landmark moment was created. In 1999, 18 Czech Roma primary school children, represented by the Open Society Justice Initiative (OSJI), sued the Czech government. D.H v Czech Republic (D.H), known as the ‘Ostrava Case’, argued that the 18 Roma children were unlawfully placed into special schools – designed for children with mild mental disabilities – and thus denied a proper education on account of their ethnicity. In 2007, the ECtHR agreed and called for an overhaul of the entire Czech education system.

For these children, the impacts of educational segregation and being denied equal opportunities were severe. Now an adult, one of the D.H Eighteen, Julek Mika, described that his experience at a special school ‘ruined his life’. Julek actually went back to mainstream primary school after two years, but his time at the special school meant that he was academically behind and was unable to pursue even mainstream secondary schooling. When I interviewed James Goldston in 2018, one of the lead counsel for the D.H Eighteen and now Director of the OSJI, he said: ‘every year that a child is subjected to inferior education, there will be damaging results for the individual child, to his or her family and their community at large’.

This was undeniably a pivotal moment for the Roma community and capable of catalysing educational reform in Czechia and across Europe. However, has anything really changed over ten years later for Czech Roma children?

During my research, I was fortunate to have spoken with a range of actors in the field Roma educational equality. I asked them all essentially the same question: what changes have you seen? Their responses nearly always used the word ‘cosmetic’ and ‘very little’.

And, it’s true. Although the Czech government would defend its actions, it has done shockingly little to effectively and tangibly desegregate schooling. Symbolising a lack of progress, special schools still exist and, rather than being abolished, were renamed ‘practical schools’. They still offer a less challenging academic environment and international monitors still report an overrepresentation of Roma. This lax approach and NGO pressure culminated in the EU Commission subjecting Czechia to infringement proceedings (legal action) in 2014 which continues to this day. Amnesty International applauded the Commission and stated that a clear message had been sent that ‘systemic discrimination towards Roma cannot and will not be tolerated’.

Recent legislative reforms, arguably prioritised because of the Commission’s pressure, include providing children with an enforceable right to support at mainstream schools and financial resources have been redirected to fund joint education. As a result, the Czech government claims that it is reducing the amount of Roma in segregated education. International organisations and NGOs would strongly disagree.

Last year, the European Fundamental Rights Agency reported that 16% of Roma children who live in areas inhabited by few or no other Roma are still attending all-Roma schools. Further reports suggest a rise in Roma students at mainstream primary schools being taught severely modified curriculums, as compared to other children. It is alleged that 29% of all primary school students who are being taught a curriculum designed for children with lower intelligence are Roma. Segregation in all but name.

Stepping back momentarily: why do practices in 21st century Europe continue to deny educational equality to Roma? In Czechia, the reasons are numerous, but undoubtedly historically hostile attitudes towards Roma have permeated from generation to generation. After a series of forced settlement policies under the Communist regime, the majority of Czech and Slovak Roma were labelled as ‘half-wits’, ‘alcoholics’, ‘criminals’ and ‘uninterested in work’.

These vicious stereotypes stuck, are still used and are even repeated by the President of Czechia. These deep-rooted racial tensions answer at least partly why desegregation of national schooling has not been forthcoming. In my opinion, the desegregation of schools is likely to only be achieved once this normalised prejudice is pushed to the margins of societies. Until then, changing the education system to fully include Roma will be seen as a burden rather than a necessity.

The situation is still dire for many Roma children. However, Roma communities are no longer accepting the status quo. During my research, I came across Roma parents, with the help of national and international NGOs, who have empowered themselves to fight for school integration, challenging school boards and local authorities.

During a field trip to a People in Need (Člověk v Tisní) youth centre in Kladno, Central Bohemia, a youth worker vividly described a common occurrence. A Roma couple wants their child to attend a mainstream primary school, the head teacher refuses entry on the basis of oversubscription and tells the parents that the local practical school – almost exclusively attended by Roma – is available. Roma parents and NGOs, like People in Need, then demand evidence of oversubscription. As the youth worker described to me, when pressure is felt by schools and individual head teachers, a place ‘suddenly’ becomes available. Sadly, this sort of situation is still reported, but it also demonstrates Roma are not just victims, but everyday activists.

There is also evidence that human rights consciousness in the Roma community is improving with events like International Roma Day used to instil a much needed sense of pride in Roma culture, as well as raising awareness of the continued human rights abuses facing Roma globally. During the COVID-19 pandemic, the need for such events like International Roma Day have been proven to be even more vital as Roma communities have faced scapegoating, denial of healthcare and targeted restrictions.

By reading this article about the shameful and persistent segregation of Roma school children, you have also done something. Many people simply do not know, some do not want to know and some do not care. But people should know. That ‘litmus test’ should still be held to the face of governments in Czechia and throughout Europe. The measure of a society is through how it treats its most vulnerable, and for too long Roma children have been held back from the school door and trapped in a vicious cycle of educational poverty.