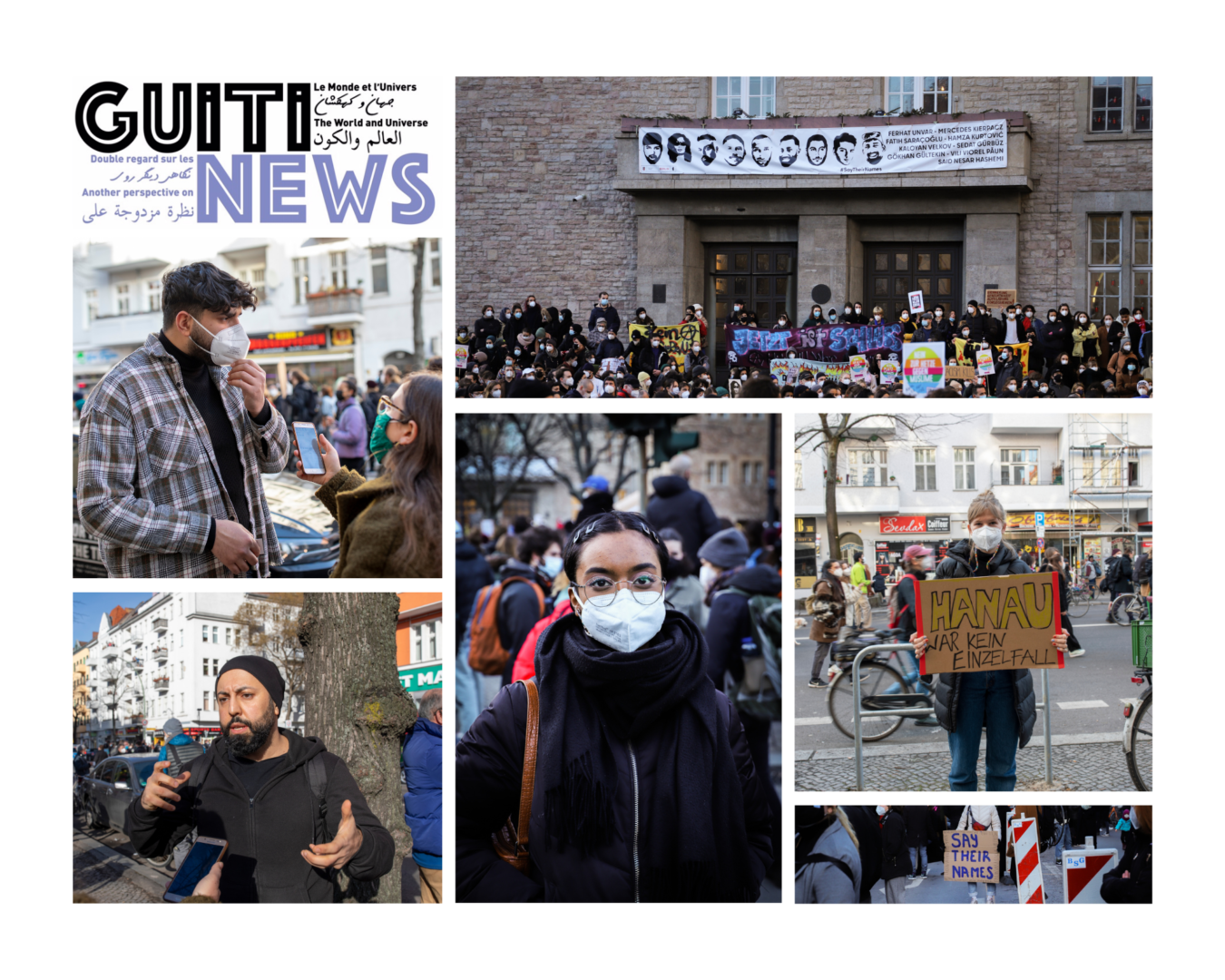 On the 19th of February 2020, a racist terrorist attack took the lives of nine people and injured a further six in the German city of Hanau, a town east of Frankfurt am Main.

The following day, an anti-fascist and anti-racist demonstration took to the streets of Berlin. German police spoke of at least 6,000 protesters. Organizers, including MigrantiFa, stated 20,000 participants. The police had initially expected 900 protesters.

From the memorial and protest in Berlin, Guiti News portrays the perspectives of five different people, all frustrated with the lack of political change since the attack and concerned with the growing sentiment of far-right terrorism in Germany. From experiencing racism themselves to showing up for solidarity, they reflect on the past year following the attack and answer the question: ‘How do you feel one year after the racist attack and what do you wish for?’

At both the memorial and protest, lots of police officers are present, but no politicians. Thousands have shown up in masks to mourn. Among them, the five people Guiti News portrays below.

Meryem argues that something like Hanau can happen again

Meryem*, Press Officer at MigrantiFa, believes that the racially motivated terrorist attack is a reflection of the racist society in Germany not just as an isolated incident, but is present throughout the whole year. “Hanau was no singular incident. There was racism in Germany before Hanau, and there is still after it”, reads a booklet handed out at the demonstration. Further flyers appeal: “remembering means fighting, to remember is to change.” The booklet is available online and in print in ten different languages. MigrantiFa and Meryem are “happy to see so many people at the protest” but would like to see this type of resistance daily. She explains: “Migrants and minorities are under threat and exposed to this fear that is produced in society every day.”

Meryem signals that in Germany, “racism is still not really seen as a German problem, but somehow as something that happens abroad, and not so much here. The police continue to criminalize migrants and places such as shisha bars, kiosks… The politicians only make empty promises.

I believe that the way the authorities and the families and the bereaved are dealt with, it is clear that these demands are not being implemented. But instead, the authorities continue to do what they want and are continuously reproducing racist stereotypes and stigmatizations.

For the future now, it simply means: fighting on. Not forgiving. Not forgetting. Remember continuously. And every day, fighting racism in this country.”

Ferat Ali is optimistic that by uniting struggles, the people will bring about change

Ferat Ali, an activist & journalist known as Der Neuköllner, has first-hand experience of racially motivated attacks: “In 2018, there was an arson attack on me and my family that we only barely survived through. It was right here, in the south of Neukölln”. He believes that Germany has been having a right-wing terrorism problem for centuries, but has seen no solutions, no resolutions.

“I would like politics to have inquiry committees all over Germany on right structures within the state apparatus -within the security authorities, within the investigative authorities, and also in the public prosecutor’s office.

What is special is that we do not see anti-racist struggles as the sole characteristic, but since we understand racism as a systemic problem,[anti-racist] struggles are linked to climate struggles, struggles alongside tenants and opponents of gentrification. And that’s why I’m optimistic that these struggles will get stronger and that we will create change from the streets.

We say ‘from Hanau to Moria – racism kills’. In this country, people do not understand that migration is part of this world history and therefore: Open borders! We just have to understand, learn to deal with it. there are changes in society and we have to welcome them. We need a new culture of acceptance, a new welcome culture in Germany.”

To Luna, we speak about the importance of allies showing solidarity

“I am here [at the protest] today because I have long known and been concerned with the problem of racism [we have in Germany]. Especially politically… many incidents that happen are simply not questioned any further, not assessed properly. The relatives [of the nine victims of Hanau] are not looked after [by the state] properly, they are not talked to.

I am a white woman. I haven’t experienced any racism, but that’s precisely why I think it’s important that I am here in solidarity and simply show that I am in favor of doing something about it. And nothing happens. And I wonder how can that be? How can it be that things are not investigated and put right? It’s just up in the air… and the families [of the nine victims of Hanau] want to put everything right entirely and they put so much effort into it… while they actually find themselves still in a complete phase of grief.

It just can’t be that somehow the father is still at large, and there is no action taken against him. The people who still live [in Hanau] have to be in constant fear because they simply know, ‘Okay, the father is still here’ and he obviously has racist thoughts too. He’s also demanding for all of the ammunition and weapons his son used [the night of the terrorist attack in Hanau] and everything back.

I have the feeling that from the German government there is so little direct addressing of the problem. So here I am, again and again. I ask myself, ‘Okay, what is being protected here?’…why is there no one attending to this work?

Anti-racism work is often done by the people who are also affected by it and I think we just have to take some weight off their shoulders here. As the majority of German society, we have to show solidarity.”

Thanushiya on life after Hanau in Germany

I was always aware that we have a racism problem in Germany because I feel it every day. The most blatant thing is that this time human lives were taken.

You can see straight away that I am not white and in addition to the racism that I experience, there is the [double-discrimination][I experience] because I am a woman… that is pretty massive. Here [in Berlin], I am sexually harassed on the street, but at the same time, also racially. It strikes me a lot here – just as much as in Paderborn [a small city in eastern North Rhine-Westphalia, Germany] where I am from.

I have the feeling that we still haven’t cleared up [the background of what happened and how] enough. We have to dismantle right-wing radical structures from the ground up by saying ‘we deal with this history’ and convey that [it is wrong] to the next generation.”

Ali Haydar on feeling like a foreigner in his hometown

Ali Haydar is part of the protest today with BDAS/BDAJ Berlin and believes that: “One shouldn’t stay calm when it comes to such a topic. No matter who it is about, whether it is about [targeting] Muslims, migrants, or Jews. It doesn’t matter. It’s just about the fact that people have to stop hating other people, because of irrelevant things such as the color of their skin, their [migratory] background, their nationality.

As someone like me – who is that bit taller and looks like a Muslim – when you get on the subway and there’s a grandma sitting there, you have the feeling that you have to prove yourself to the grandma that you don’t want to hurt her. You always have the feeling that other people think badly of you and that you have to present yourself as a ‘good’ migrant, that you are an integrated German citizen – and not what people would normally expect you to be.

There will always be people who say, ‘You don’t belong here. You are not from here.’ But you have to accept that. I was born in Berlin. I feel like a Berliner and that’s my way. That is what I have accepted for myself.”

*Name has been changed