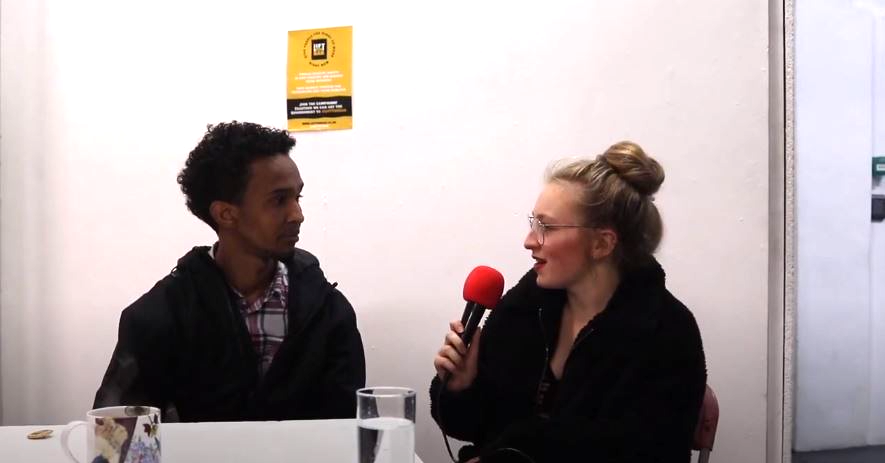 Earlier this year, I had the pleasure of meeting Ahmed, an Ethiopian refugee, at a panel event organised by Bristol University Student Action for Refugees (STAR).

A few years ago, Ahmed arrived in the UK alone, at the age of 17. He tells me that he used to live in Calais, France, until ‘the Government brought [him] here’. He spent his first one and a half months in the UK, living in Crashpad accommodation, which he described as an ‘emergency room’, which consisted of ‘just a bed’.

After this, he moved into a hostel, an experience he described as ‘difficult’. He told me that ‘everything [was] complicated…you are somewhere you’ve never been before, and everything is complicated. You’re not the same as the other people around you, and it’s hard’.

Bursting with pride, Ahmed then tells me that he now lives in his own flat. ‘Three years before I used to live in one room with no fridge. Now I’ve got my own flat.’

I asked him whether he felt supported by the Government when he arrived in the UK. And perhaps to the surprise of those familiar with the anti-immigrant rhetoric of the UK Conservative Party, Ahmed felt that he was very well looked after, particularly by the local government.

‘Local government took the biggest responsibility when I arrived here. And social services helped me a lot.’

But charities appear to be filling in the gaps where the Government is failing. Ahmed tells me about 1625 Independent People, a Bristol-based charity that offers self-contained flats and shared houses to 16 to 25-year-olds. It is this charity which provided him with his current home.

Yet, Ahmed recognises that the Government is not doing enough for asylum seekers. So Ahmed has joined hundreds of others as they campaign for a change in Government policy: the Lift the Ban campaign, which seeks to lift the ban which prevents asylum seekers from obtaining paid work. After being an asylum seeker for three years, Ahmed has the first-hand experience of what it is like to have such a fundamental right, the right to work, taken away from you. He told me that he felt great depression and distress while not able to work – that it was ‘like being in a huge house arrest’.

For Ahmed, this feeling of hopelessness was exacerbated by the fact that there are many other parts of normal life that asylum seekers are not able to access, such as certain educational and vocational courses. He told me that ‘many young people would like to rebuild their lives and forget all the negative background that they had in their early lives…but there are barriers that we couldn’t deny’.

Waiting for a ‘normal’ life…

The fact that asylum seekers cannot work means that they cannot live on more than the paltry amount that the Government provides asylum seekers with – £37.75 per week, which equates to a daily budget of £5.39, around 5.90€.

Ahmed tells me, ‘As long as you can’t work, you can’t help yourself financially, the money that you get from the government is not enough, you can’t do anything other than wait [until you are told the outcome of your asylum application]’. Ahmed also informs me of the alarming existence of an industry that profits from the exploitation of vulnerable asylum seekers. He tells me of ‘opportunistic employers who try to take advantage of asylum seekers, they employ them but give them a very small amount of money, and they risk their lives and have no protection if they injure themselves, or if there is any abuse’.

This ban, as well as egregiously restricting the freedom of asylum seekers, and rendering asylum seekers vulnerable to horrific exploitation, also makes little economic sense. Maddy, a former Student Network Coordinator of STAR National, told me that the ban ‘just seems absurd, especially when there have been surveys…that have shown that a huge majority, over 96% of asylum seekers, if given the option, would work. It seems ridiculous that the government is saying no, live off our money’.

I asked Ahmed how he felt when he received his refugee status, and, as a consequence, the right to work. ‘Relief. You feel like you have a normal life now, and you are a normal person now’.

Now, he plans to continue his education, adding, ‘If I were still an asylum seeker, I couldn’t even continue my education.’ He told me that he is going to apply to Bristol University, to study a Foundation Year in Social Sciences, designed for students who have been out of education for a few years, after which he hopes to pursue a Law degree. ‘My biggest plan is to help people. That’s why I chose to learn social sciences. And to be in the social line, to be in the communities, and to help them, if I can.’