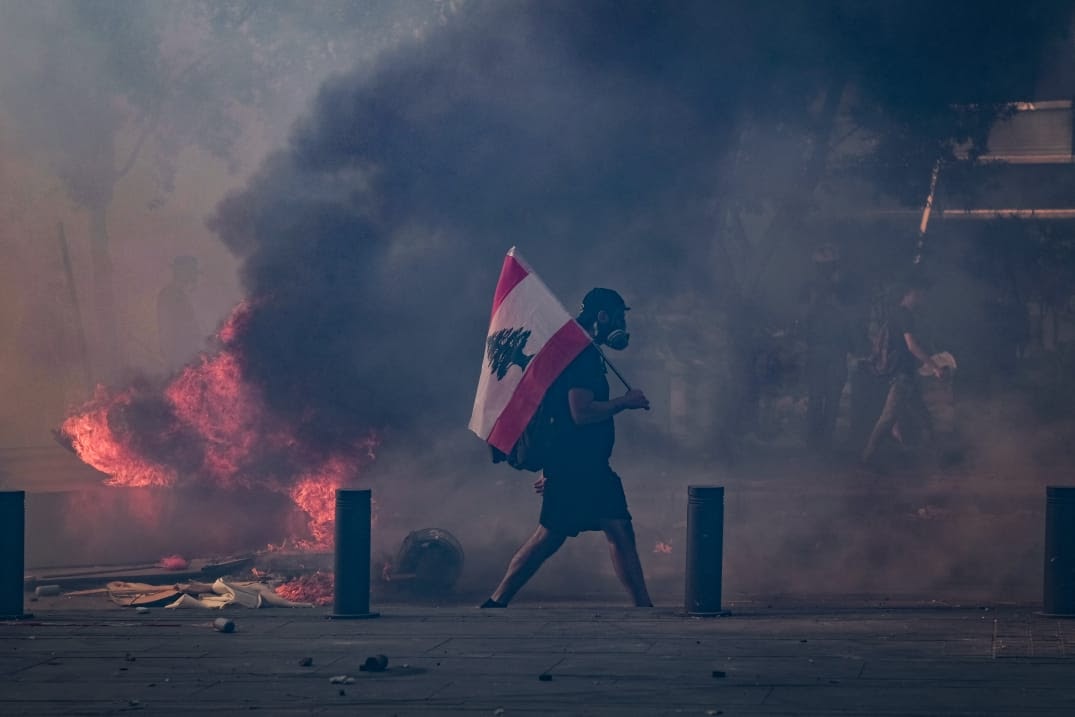 On August 4th, 2020, two tremendous, devastating explosions shook Beirut. These caused the death of at least 200 people, injured more than 5,000 people, and left another 300,000 homeless. In our series Lebanese Voices, we are giving a voice to those who have witnessed the destruction. Guiti News calls attention to not only this disaster but also to the political situation in Lebanon, their desires, and hopes for the future.

Mosaad is Palestinian. He lived his whole life in Syria, a neighboring country of Palestine. But because of the war that is ravaging the country since 2011, he had to leave.

When Mosaad arrived in Lebanon in 2014, he struggled to find a job, like so many foreigners. “When I first arrived in Lebanon, it was not easy at all,” he explains. “I had a lot of difficulties finding a job,” Mosaad adds. Working mainly as a proofreader in the cultural field, he did not really know who to turn to for help and advice.

But after a while, life in Lebanon began to be easier for him. “I found a job. Since then, I have built a career somehow in Lebanon.” Mosaad does feel happy about his professional situation. “I do not really have to complain on that side,” he says, “I have not even suffered that much from the economic crisis since I mostly work with people living outside of the country. We have not been affected too much by everything that is going on in Lebanon since October… Economically speaking, I mean,” Mosaad adds.

No papers, no rights?

Professionally, Mosaad believes that he does not have a reason to complain. Yet, his life in Lebanon is not easy at all. “I don’t have any legal documents here, which makes everything harder than it should be,” he begins to explain. “The problem with being considered as illegal on the territory is that I do not only feel scared all the time, but I also do not know how to make money and how to send it to my family.”

Job security does not guarantee him security on the streets: the fear of being arrested remains perpetually present in Mosaad’s mind and life.

The storm of the “thawra”

The revolution recalls many things Mosaad went through during the war in Syria that he would have preferred to forget.

“I do not have anything anymore. How do you want me to keep going?”

Already tremendously disturbed by the revolution, the blast in Beirut on August 4th left Mosaad speechless. “My house used to be very close to the port, so it got completely destroyed by the blast,” Mosaad tries to explain. “Now, I have nothing left. My house and all the furniture inside it got completely destroyed. There are only a few walls which did not get damaged by the explosion entirely, but I do not think we will be able to go back there anytime soon,” he adds.

“I already had issues to stay focused and work efficiently. But how do you want me to keep going without even having a house?“, wonders Mosaad.

Until they find a safe and secure place to live, Mosaad and his girlfriend are staying with their friends. “We are sleeping on our friend’s couches when they have some free space for us. We are kind of Couchsurfing,” Mosaad says with an ironic tone. “But this situation cannot continue this way,” he adds, sounding more serious. “We have to find a long-term solution.”

After the explosion, the Lebanese government declared a state of emergency that directly affects Mosaad and other foreigners living illegally in the country. “The early periods of the state of emergency affected me a lot,” confesses Mosaad. “I am afraid of everything now… I am afraid to go out of my own house. I am afraid to leave Beirut in case anything happens… The simple idea of crossing the road with a soldier watching me frightens me.”

At the beginning of the revolution, Mosaad did not go out to demonstrate because he was afraid of the Lebanese Army. “I have very bad memories of the police in Syria. I tried to face it, but I could not,” he explains. “So, I tried to help in other ways by going to some meetings about the revolution, writing articles, starting discussions about the thawra….”

Since the declaration of the state of emergency, the presence of police officers in the streets is much more common. With that, Mosaad wonders if he will ever be able to live normally again in Lebanon.