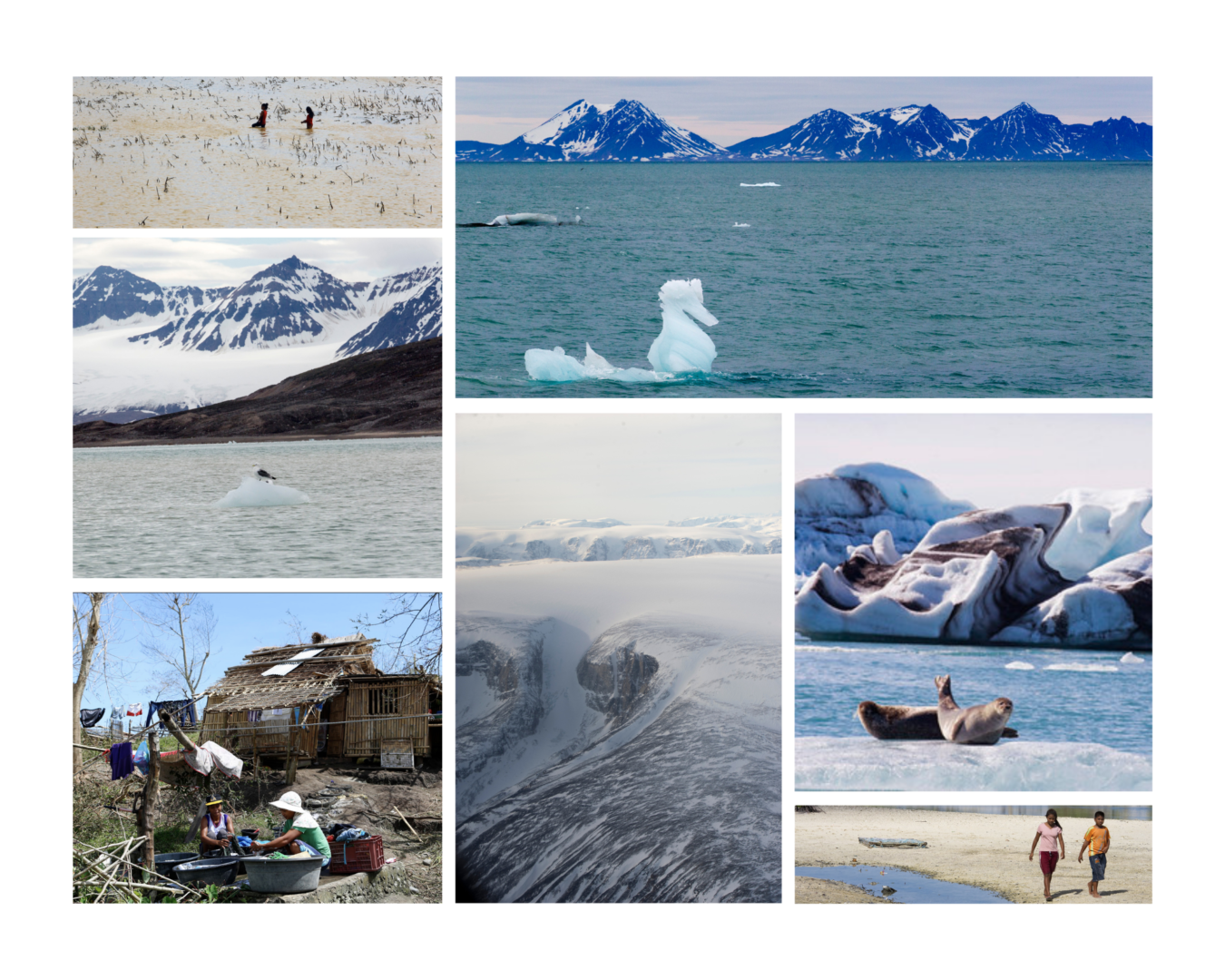 Today, on 19.03.2021, people around the world are taking to the street to demonstrate. Among them, most notably, Fridays for Future, global climate strike movement, demands politics and industry meet the commitments made to the 1.5C degree pathway.

The climate crisis* is, just as migration, a transversal topic that touches on broader themes like racial justice, feminism and health. More generally it highlights, Friday for Future activists Vanessa Nakate and Luisa Neubauer argue, the severeness of exciting systems and structures of inequality.

As we face the biggest challenge of our generation, a global pandemic, the largest crisis known to humankind is not just on its way but already in full force: the climate crisis. With its threatening impacts, people are forced to flee their homes, ultimately becoming climate refugees, a concept which is not yet recognised legally. The World Health Organization estimates that the climate crisis is already responsible for 150,000 deaths annually. As temperatures and sea levels rise, so does the number of climate refugees.

By 2050, due to the climate crisis, there will be 143 million climate refugees, only in sub-Saharan Africa, South Asia and Latin America, according to the World Bank. The deterioration of the environment will indeed have a tremendous impact on the dynamics surrounding migration as we know them. The rising of seas and oceans will displace various populations, especially those living near water, thus leading them to abandon their homes and their countries. Soil pollution, added to the increasing droughts, will force families who depend on agriculture to flee and look for another land.

The climate crisis has become a rising and unquestionable issue regarding the survival of our planet, but it has also become an urgent question of migration in the world. As of today, climate catastrophes are causing mass displacement – a number that is already exceeding the amount of people forced to move due to different wars. The issue surrounding climate refugees is not a subject of imagination, nor a problem for the future – it is already an existing and urgent matter that needs to be handled in all economic, political and legal aspects.

What is the climate crisis?

Climate change, global warming, climate emergency, climate crisis,… What does it all mean? With a crisis of this scale and scope, it is no surprise that one can feel confused and unclear on the specifics. Simply put, the climate crisis means our world is warming to worrying degrees. The term refers to the effect of rising temperatures on Earth. Global warming can be thought of as one of the types of changes to our environment. The climate crisis more widely also encompasses changes that reach beyond rising heat levels, such as shifting rainfall patterns.

The rising temperatures are, for example, why much of the planet’s land ice is starting to melt at a significant speed and sea levels are rising at an accelerating pace. So much so, that the last four years were the four hottest on record in history. Ideally, as set out by the 2015 Paris Agreement, the international treaty on the climate crisis, global warming levels should be limited to well below 2, preferably to 1.5 degrees Celsius. In the Arctic, average air temperatures were about 1.9 degrees Celsius (3.5 degrees Fahrenheit) in 2019, higher than the average from 1981-2010. The region has been warming concerningly quicker than any other place on the planet.

Climate refugees, also sometimes referred to as environmental refugees, encompasses everyone forced to flee their city or country “in the context of disasters and climate change.”

“Around 33 million people have died prematurely due to air pollution”

While climate refugees are just beginning to become part of the public and political discourse surrounding the global climate crisis, the losses and tremendous trauma that has already shaken these spheres is astonishing: “Since 2015, around 33 million people have died prematurely due to air pollution. In 2019 only, nearly half a million infants didn’t make it to being one month old because they were killed by air pollution,” the Ecologist reports.

Hurricanes, floods, droughts, heat waves – it is most particularly developing countries that are affected and destroyed by such natural disasters. According to the Global Climate Risk Index, countries that were affected the most in 2019 were Mozambique, followed by Zimbabwe and Bahamas. Counting for the period between 1999 to 2018 Puerto Rico, Myanmar and Haiti were hit the hardest.

The Germanwatch Report reveals that, between 2000 and 2019 alone, over 475 000 people lost their lives as a direct result of more than 11 000 extreme weather events globally. The damages amounted to around US$ 2.56 trillion (around EUR€ 2.14 trillion in purchasing power parities).

Refugees in reality, but not refugees in the eyes of the law

The current definition of a refugee is stipulated in the Geneva Human Rights Convention. It states that a person is deserving of protection if they have a “well-founded fear of being persecuted for reasons of race, religion, nationality, membership of a particular social group or political opinion…”

The Geneva Convention does not protect people who are victims of natural disasters such as flood, famine and disease, such as Ioane Teitiota, a Kiribati man who would have been the world’s first climate refugee. His appeal for asylum was rejected by New Zealand’s Immigration and Protection Tribunal, the Court of Appeal and the Supreme Court in 2015. As sea levels rose to threatening levels, Teitiota fled Kiribati island due to the flooding of his village, uninhabitable land, failing crops, unsafe water and growing illnesses in his young children and family members.

« I’m the same as people who are fleeing war. Those who are afraid of dying, it’s the same as me, » he told BBC News in 2015. Because Teitiota’s case did not fit within the Geneva Convention refugee requirements, his asylum was rejected and he was deported. He took his case to the HRC (Human Rights Commission), where it was decided that the decision violated his right to life. Still, since then, international law and immigration law makes no formal mention of protection of the climate refugee, meaning a group of very vulnerable people in need of protection risk falling through the cracks.

Oli Brown, the author of the International Organization for Migration’s Migration and Climate Change report has written: ‘there has been a collective, and rather successful, attempt to ignore the scope of the problem… so far there is no “home” for forced climate migrants in the international community, both literally and figuratively’.”

Highly vulnerable regions in the emerging world include Sub-Saharan Africa and South and South-East Asia, according to the World Bank. Anti-immigrant sentiment continues to increase and manifest in unsafe ways in Europe and across the world, whilst governments have increasingly criminalised migration and made the protection and settlement of refugees and asylum seekers progressively more difficult. As the numbers of asylum seekers born out of the climate crisis increase, it will become more and more difficult for the international community to ignore these challenges.

The climate migration debate is divided into two. On the one hand, many politicians continue to believe that refugee status awarded to climate refugees is not appropriate and pertinent as it is yet to be recognized globally under the Geneva international convention rights. People with such opinions believe that we cannot yet talk meaningfully about issues faced by climate refugees since they mostly represent in-country and short distance movements.

However, on the other hand, a growing number of experts defend the extent to which climate migration needs to be put in perspective. Firstly, the environment and its degradation clearly represent a source of political conflict, as the effects of climate change will continue to heighten competition for scarce resources such as land, food, and water. Indeed, we cannot separate ecological realities from economic and social issues. These dynamics go together: a family who have lost their home and land because it is now under water is not exclusively an environmental issue, but a harsh economic and social reality.

The need for a collective action

The rising of seas is putting at risk two-thirds of the world’s cities with populations of over five million people. The growing soil degradation is killing many regions’ food and agriculture supplies and production. The rising food, water and housing insecurity will inevitably grow wider the global inequalities separating rich from poor countries and regions.

Countries, NGOs, and international institutions need to work hand in hand and produce coordinated responses to implement both sustainable production and effective support and hosting for climate refugees. As UN Secretary-General Antonio Guterres defended, “the climate change emergency is a race we are losing, but it is a race we can win”.

Hence, Guiti News is keen to contribute to the conversation surrounding climate refugees and the climate crisis. In our three-part series on The Rise of the Climate Refugee, we will explore the ecological, legal, social and political problems imposed by the climate crisis. If you are a climate refugee yourself or have been affected by natural disasters, share your story with us via email or get in touch for a safe signal.

* Editorial note: With the state of emergency of our environment, Guiti News believes terms such as « climate change » are not accurately reflecting the seriousness of our global situation. Hence, we have decided to refer to it as « climate crisis » exclusively in our coverage.