Their story News Suella Braverman, “diversity” as a tool for a xenophobic policies 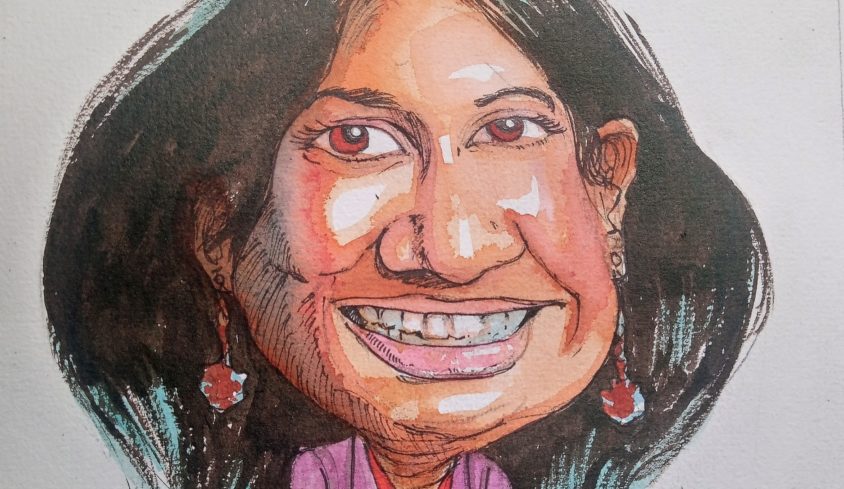 « [He was] nervously folding away his one-way ticket from Kenya. He had no family, no friends and was clutching only his most valuable possession, his British passport. His homeland was in political turmoil » recalled Suella Braverman, the new home secretary, the story of her father, Christie Fernandes, when she first joined parliament in 2015.

One would think the daughter of two immigrants would sympathize with refugees fleeing the same wars her father did when he fled Kenya in 1968, when Kenyan secessionist groups tried to join Somalia. Or that perhaps she would sympathize with immigrants seeking a better life like her mother who emigrated from Mauritius, an island in the Indian Ocean, west of Madagascar. Well since Suella Braverman joined parliament she has proved to her conservative colleagues that is not the case and she has no sympathy for immigrants nor refugees.

Before first joining parliament in 2015 as an MP (Member of Parliament) for the district of Fareham in Hampshire she spent years as a lawyer combating refugee claims for asylum in the UK.

Braverman got her first ministerial job in 2018 as a Brexit minister, appointed by then prime minister Theresa May. a Brexit deal that was largely built on stopping immigratoin with the support of Boris Johnson, then mayor of London and Nigel Farage, then leader of the Brexit party.

The British Empire…a force for good

Suella Braverman resigned from her job as a Brexit minister in 2018. In 2020, Boris Johnson, then prime minister, appointed her as an attorney general; a fancy job title to say legal advisor for the prime minister.

She spent her time as attorney general attacking the rights of asylum seekers, the rights of trangender children and attacking « woke culture », thanks to the Telegraph, a conservative newspaper, who gave her a platform to write.

As an attorney-general, she continued her fight against the rights of asylum seekers in the UK.  When she was confronted about the illegality of deporting asylum seekers to Rwanda, the attorney-general asked governments lawyers to seek «solution based advice» when confronted with the unlawful policies that she had proposed, she asked « government lawyers [to] work with ministers to problem-solve issues » regarding the unlawfulness of deporting asylum seekers a spokesperson said.

« Taking back control on our borders »

After Boris Johnson resigned last July following multiple scandals, Suella Braverman jumped ship and announced her candidacy for prime minister. In her campaign, she chose her main target: immigrants and boats coming to the shores of her country.

As for her prime minister aspirations, she saw them fail in the early rounds of the conservetive leadership race, only making it to the third round.

After failing miserably in the conservative leadership race, she pledged allegiance to Liz Truss, who ended up winning the race and was appointed the new prime minister of the UK. Braverman’s loyalty to Liz Truss was rewarded, as she was appointed from day one as home secretary.

The Observer, a newspaper owned by the Guardian group, pointed out that in her very first speech to the departmental staff, the new home secretary layed out her objectives, the first one was: stopping immigrants crossing to the UK. It seems that Breverman is looking to be more aggressive than her predecessor was.

As for staff members who would feel sad for sending human beings away, Breverman had a solution: watching reality television. « It’s important for people to look after their wellbeing. Best antidote [for work-related stress] is trashy TV » the Guardian reported she told her staff, she even suggested that they watch Love Island, Married at first site as well as First Dates.

The Tories, party of the “dying white man”

The appointment of Suella Braverman as home secretary continues the trend of the conservative party anti-immigration policies. A conservative party that has approximately 200,000 active members of which 93 % are white, 63% are male and 37 % of them are 63 years old or older. It is an old boys conservative club, with a xenophobic attitude to anything that does not look like them. But the real question is: What do Suella Braverman, Pritti Pattel and Sajid Javid, the last three home secretaries, with Indian origin, see differently in immigrants and asylum seekers, who like their parents are pursuing safety and happiness ?

According to the figures of Sky news, more than 28,526 arrived on the shore of the United Kingdom, a figure that will likely double this year, according to the same source.