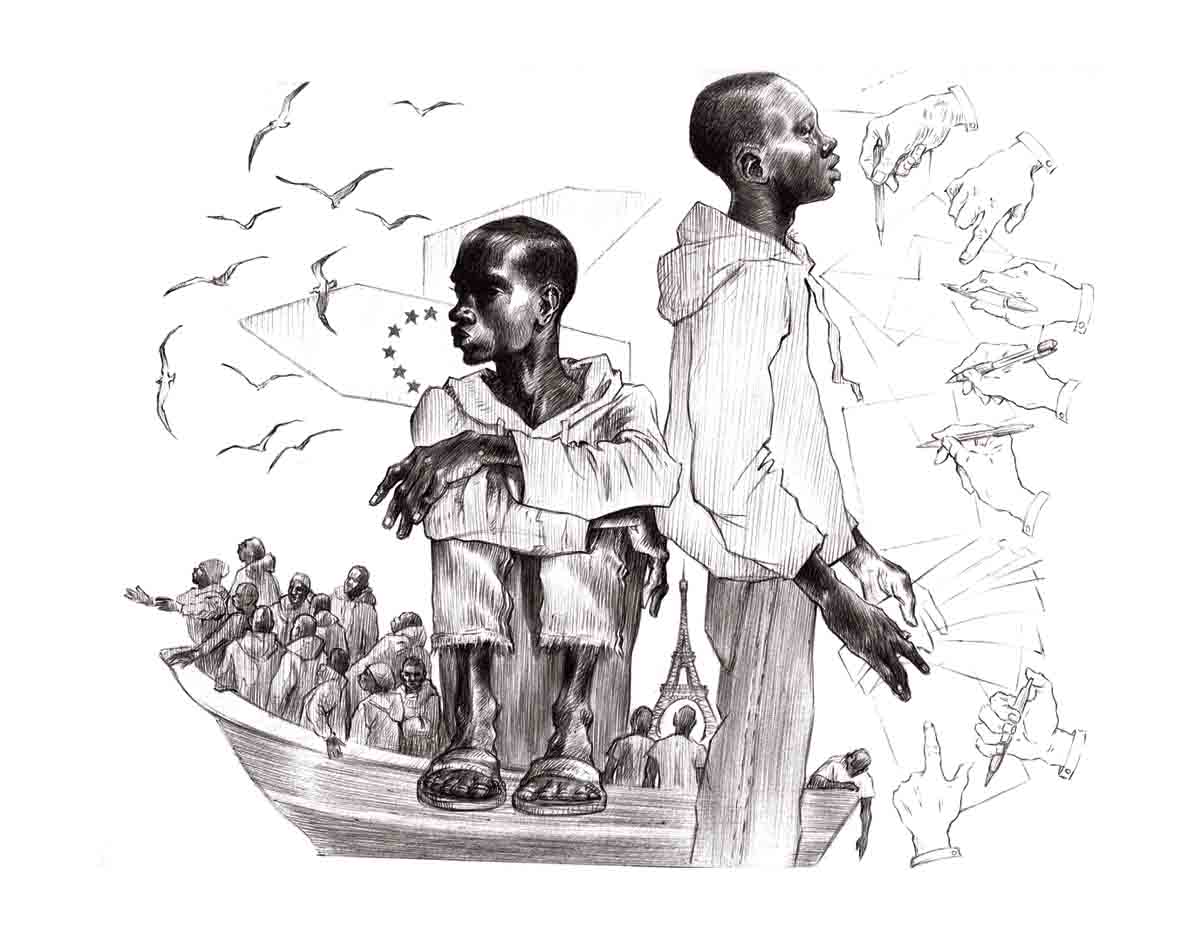 When does a refugee stop being a refugee?

“I had to leave my country, Lebanon, and suddenly became a refugee. Since then, I carry this “label” every day with me everywhere“. In this testimonial, Hussein Dirani wonders when we will stop considering him a refugee and confronts his new identity.

Guiti News is challenging the conversation surrounding migration. Guiti brings a unique perspective to these narratives : every piece is created in collaboration of European and exiled journalists and artists.

A confession and a discussion…

The question is on my mind, always. All the time.

I had to leave my country, Lebanon, and suddenly became a refugee. Since then, I carry the label “refugee” every day with me everywhere. I started dealing with my needs and problems daily in terms of the challenges that came with being a refugee.

This was not because I wanted to, but because society and those surrounding me had defined me as one. For example, I had to wait 2-3 weeks just to get my monthly pocket money and this procedure I needed to do it every month.

On one hand, the local community has been helping and supporting me. This is very welcomed as Germany is a completely different country from the one I knew. Its traditions and customs were unfamiliar to me, its language unknown.

On the other hand, I had to go to a place over 20 times just to be able to get a German course – the gateway to start integrating into German society. However, if you go to any of the government offices they only speak German and if you don’t know the language you can risk signing documents without understanding them.

You have to go ask someone to come with you to translate for you. The problem is that it’s really not easy to find someone,especially when you are new in the country and barely know anyone.

After some time, I started to speak and understand the language, the culture and rules of this new place. I decided that I wanted to be part of this society and return the favour by doing something impactful.

I began volunteering with some programmes that were created exclusively for refugees. I soon became involved with projects such as “Volun-Tea Mondays” which works with refugees in Germany to highlight volunteering as an opportunity to do good for others and oneself.

It is one of the best projects I have ever participated in because I was able to help a lot of other refugees. I supported them in finding language courses, a place where they can volunteer and more. It also was a chance to give something back to my new community while practicing my German language skills.

After this, I began to think more intensively about the identity and construct of being a refugee and being considered one. “Do I really want to stay a refugee forever?”, I wondered.

To me, being a refugee means that someone is in a specific phase of their life. A time during which they need help to be able to come and stay in a safe zone. Now that I am here and comfortable here – why do people still call me a refugee?

Why are you still calling me a refugee? I learned the language I volunteer regularly, I try to make the neighborhood I live in a better place, I am connected to the local community, I make and meet with friends and colleagues, I have a proper job and I am paying my taxes.

If we want to look at the definition of the word refugee, we will find that it refers to a certain period of time when a  person is forced to move from point A to point B. This being for reasons of war, any kind of a disaster, or political and economic situation. So it seems that we all agree that holding the identity of a refugee is time restrained and location bound. If a person is in a location where he needs help, then yes, they are a refugee.

But when the same person starts doing everything by themselves without the aid of anyone, do they remain a refugee? When do they start to be considered part of the community they now identify themselves with?

Just because their documents or asylum process is not done yet? And why is it that a piece of paper has the power to decide one’s identity? Why do we make assumptions about a person based on the skin colour or their belonging to an ethnic group?

Isn’t this some form of discrimination? You are asking me to integrate in the same society where you are labelling me, you are putting obstacles and creating boundaries for me. You are handcuffing me.

When will you stop considering me a refugee?